Low-Histamine: What you need to know

Iron Deficiency: Let’s talk about why you might be tired…

Gut-Brain Axis: What is it and How does it effect me?

The chicken and the egg…

Let’s talk about the evidence demonstrating how our intestinal flora, microbiome and the bacterium inhabiting it are connected to our brain (and nervous system) and can influence how it functions.

This article has over 25 recent peer-reviewed scholarly references

What is the Gut Brain axis? 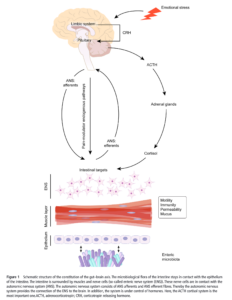 The gut–brain axis is a bidirectional link, and which facilitates communication between the brain and the gut, it has been discovered that gut dysbiosis can alter brain function and trigger the development of mental illness disorders such as anxiety, Parkinson’s (Arneth, 2018), depression (Capuco et al, 2020), Alzheimer’s (Fujii et al., 2019), and autism (Srikantha & Mohajeri, 2019; Pulikkan et al., 2018; Masi et al, 2017).

Despite considerable progress, researchers are only beginning to explore the numerous neuro modulatory signals and structures that comprise the gut microbiota–brain axis (Bauer et al., 2016). The axis has expanded recently to include the entire central nervous system (not just the brain) (Wang and Kasper, 2014; Bauer et al., 2016).

This tells us that there is a link between our trillions of microbiota organisms in our gut and the nervous system. 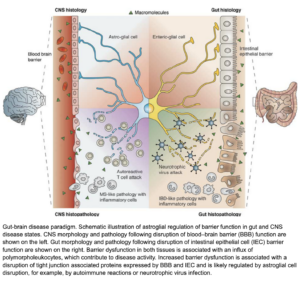 Leaky Gut – Leaky Brain barrier can lead to some of the worst-case scenarios and unfortunate common diagnosis like Parkinson’s and Alzheimer’s. It was found in a recent study that children with Autism spectrum disorder showed altered tight junctions and increase permeability in both the brain and the gut (Srikantha & Mohajeri, 2019).

So, let’s say we do not have leaky gut yet… Is there still communication between my GUT and Brain?

This cross talk allows the brain to signal the gut and vice versa. Researchers have reported that the microbiota has the ability to influence enteric nervous system (Gut nerves) activity through the production of unique molecules (cytokines and hormones (Masi et al., 2017)) with the ability to alter the function of various neurotransmitters such as γ-aminobutyric acid (GABA), melatonin, histamine, serotonin and acetylcholine (Sampson & Mazmanian, 2015).

Mediators affect all aspects of brain physiology, including feeding behavior, sleep, thermoregulation, emotion, and memory, and their interactions with the BBB are an integral part of the cytokine network (Masi et al., 2017; Pan et al., 2011). These mediators are involved in the central nervous system signaling, and are also involved in metabolic and endocrine system signalling, which is why they are associated with neuro-psychiatric disorders such as autism, depression, anxiety, stress (Wang and Kasper, 2014). Chronic cytokine release has been linked to disrupted epithelial lining integrity and influencing the transport of brain mediators – as cytokines can enter the BBB.

In other words: your microbiota are responsible for creating mediators or signals, which can change how your neurotransmitters, metabolic and endocrine systems function.

also responsible for communicating with my endocrine system (hormones that control major functions of the body – like growth, bone maintenance and puberty- just to name a very few)

my body’s metabolic system (how we break down food and use it for energy),

and not to forget the entire Nervous system (your brain, spine, nerves and neurotransmitters).

The short answer is YES> 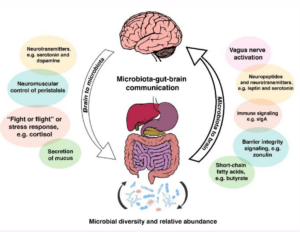 They also communicate via the vagus nerve:

Through the vagus nerve (actually two right and left), the intestinal microbiota can influence different processes such as the production of metabolic precursors, neurotransmitters and active metabolites (Sampson & Mazmanian, 2015).

To me this clearly suggests if our gut microbiota are under stress and potentially imbalanced, they might not be sending all the right signals to these VITAL systems in our body and our brains.

Many of the articles I read suggest those people suffering from mental illness often have gastrointestinal issues and vice versa, this is not a coincidence! One study shows similar states of dysbiosis (dis-balance of the gut microbiota) found in patients with depression disorder shows the link and the bidirectional communication, and indicates the effects of the microbiome on the hypothalamic – pituitary stress response (Schneiderhan et al., 2016)

It is important to note – while our microbiome is responsible for sending signals to our brain – our behavior and cognitive function of the brain can create imbalance in the microbiome as well (Rogers et al., 2016)

Important factors to consider in this article:

What is Serotonin and why is it important?

Serotonin is a hormone that stabilizes our mood and is responsible for numerous vital body functions. 90% of serotonin is localized in the epithelial gut cells – and requires specific microbiota to be synthesized – so it can carry out its ‘good’ feeling jobs (see list below).

The microbiota (of course) release metabolites including Short Chain Fatty Acids (SCFA’s) which stimulates the epithelial cells to increase expression of the amino acid tryptophan subsequently niacin – which is required for serotonin synthesis (Rode et al., 2020).

The decreased diversity and stability of the gut microbiota may dictate serotonin-related health problems in the elderly (Berger et al., 2009).

Serotonin is vital for our brain and body functions: 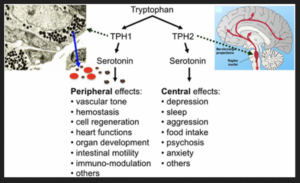 These tissue healing molecules are made when our healthy and diverse microbiota eat and metabolize certain foods (Acetate, propionate, and butyrate) – insoluble fibers and resistant starches to be exact. They have remarkable positive impacts on the body, immune system and the brain: 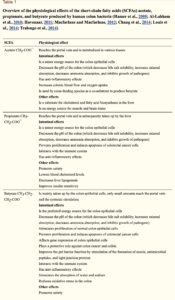 Interestingly there are specific resident bacterium responsive for converting prebiotic foods into butyrate include: Firmicutes phylum- Faecalibacterium prausnitzii, Anaerostipes, Eubacterium, and Roseburia species (Riviere et al., 2016). Which is important, if you are lacking in some of these specific species may not be able to produce SCFAs.

They have found a reduction of certain SCFA producing microbes such as Faecalibacterium and Roseburiain in Autism Spectrum Disorder (ASD) children, which supports the hypothesis that the lower levels of SCFA’s in ASD leads to an imbalance in brain functioning and behavior (Pulikkan et al., 2018). And what causes a reduction in those microbiota > DYSBIOSIS.

Because this is a two-way bidirectional cross talk- it is vital to not only care for your gut health, heal the increase permeability, but to also work from the top down. Tools to manage stress, reduce anxiety and promote self-worth could initiate a wave of dysbiosis correction (at minimum enhance serotonin release).

Take action with these 3 helpful hints:

There is clear evidence that processed substances  like gluten, alcohol and sugars, and medications like antobiotics can be associated with dysbiosis and leaky gut (increased permeability of the intestinal wall) by elevating toxins and allowing over growth of opportunistic resident microbiota to create imbalance (Carlson et al., 2016).

Start with a few easy stress reducing activities like drawing, yoga and meditation. Incorporate them into your daily routine- believe me you will see results. Also, carve out time to relax- read a book, make a new healthy recipe or just have a cat nap. This will work in the top down effect, promoting a reduction in CNS stress response mediator release (eg. cytokines, cortisol) that can lead to disruptions in the Gut lining via the Gut-brain axis.

Eat a variety of prebiotics and probiotics:

Because they turn into SCFA’s! The more prebiotics (dietary fibres) you consume and the more diverse your microbiome will be, and the greater chance you have of feeding the right bacteria which converts this fibre into SCFA’s.Try to incorporate leeks, asparagus, artichoke, garlic and onions (there are many more) into your diet on a regular basis. They also aid in the conversion of tryptophan to serotonin.

Tryptophan (an essential amino acid- not made in the body) is needed for serotonin synthesis in the gut (where over 90% is made).  Unfortunately when you consume protein rich foods (high tryptophan foods), branched chain amino acids (BCAAs) leucine, isoleucine and valine usually compete for binding sites in the brain – so tryptophan doesn’t get converted to serotonin to be used centrally (Jenkins et al., 2016).

A balanced gut is more effective that consuming a ‘diet’ high in tryptophan. Which can be taken in a probiotic supplement or be ingested via fermented foods.

There is still debate that supplements containing antioxidants actually benefit health- BUT there is clear evidence that ingesting plant food or Phytochemicals (botanical active ingredient in PLANT food) is beneficial for your health- there are over 250,000 articles since 1991 linking phytochemicals to prevention of chronic illness including Alzheimer’s, Cancer, Cardiovascular disease and more (Yeung, 2019).

I hope you enjoyed this overview of the gut – brain axis. If you have more questions please subscribe to my WhatsApp Wellness to receive current evidenced- based education on all things Health and Wellness!

Your Health and Wellness Specialist,